skip to main | skip to sidebar

So, it has been over a year since I have posted anything. I suppose that shows how inconsistent I am. I have never been very good at keeping a diary. Oh well...I am here now :)

It has been a very big year for me. SO much has happened and changed in my life. So let me begin. In April of 2010 I had a very eye-opening conversation with my husband. If you have read any of my posts before, you know that I am overweight. At times I am very frustrated with myself and the things I can't do. BUT despite that I LOVE who I am. I have never "felt" fat. It is when I see myself in pictures that it really hits home. My husband has ALWAYS called me beautiful and he makes me feel very attractive. I am so blessed in that regard.

So...back to the night in April 2010. My husband and I were having a conversation, again, about the gastric-bypass surgery. I told him, "I don't want to do it. It is the easy way out. I should be able to loss the weight by myself. Not to mention, I am terrified of that kind of major surgery." My husband, very lovingly said, "Gwen, I just don't understand. You have a potential cure for your diabetes in front of you. Why won't you consider that? I don't want you to die."
For those of you who don't know, I have been diabetic for 13 years. I am on 100 units of insulin a day, as well as metformin for my sugar. I have high blood pressure and I have borderline sleep apnea. This particular surgery has been looked at as a potential "cure" for diabetics. There have been radical outcomes for those with diabetes.

So, after hearing my husband put it that way, I decided I should at least look into it more. There is a doctor here in my area that is one of the best for this surgery. People travel from Canada to have him perform the surgery. I thought, if I am going to look into this, he has to be the doctor, but I knew that my insurance did not cover him. In calling his office, I found out that they were in the middle of contracting with my insurance company. So, should I choose to continue with them after the informational consult, I would be covered. WOW was all I thought.

After going to the informational consult I found out a lot. I realised that this surgery is NOT a "quick" fix. It is a lot of hard work and there are lots of rules that have to be followed afterwards. Like, no more soda..EVER. No drinking when you eat EVER. No more chewing gum, no more drinking through a straw. You only eat 3 meals a day...that is it. You still have to exercise. You still have to make SMART choices in food. ( I had this picture in my mind that this surgery would do the work for you) And you have to take vitamins for the rest of your life. (shouldn't we being doing this anyway???) I also found out my actual weight...291 lbs and my BMI..55 (just for perspective for my height a healthy BMI would be at most 25)

So, i decided. I would do the surgery. On July 8, 2010 I had the gastric bypass surgery. If there was even the slightest chance that I could be rid of diabetes, I had to try...so I did. After being in the hospital 2 days and not really losing any weight, I went home only on 40 units of insulin, no more metformin and no more high blood pressure medication.

It is now 15 months later...today is October 21, 2011. I am now only on 18 units of insulin a day. I take no other medication . I no longer have high blood pressure. I no longer have sleep apnea. I am a MUCH healthier person. Although I am not completely off my insulin, and truth be told, that may never happen (because I have been on it for so long) I take so much less. And as the weight continues to come off, that dosage will continue to drop. My personal goal is to get to 10 units a day. So, I have succeeded. This surgery has accomplished what I hoped. I believe I will be around to watch my kids grow and marry and have kids of their own :) I don't think I could have said that before.

I have also had a neat side effect from this surgery... :) I have lost weight.Yes I said side effect. Weight loss was not my goal...health was. Of course, the two go hand in hand. You can't be as heavy as I was and be healthy. So, I now weight 164 and my BMI is 31 and I am thrilled!!!

I have never wanted to be one of those people who obsesses over their weight and talks about it all the time. I really don't but I have to say it is great to feel so great. Now that I have lost 127lbs I can do SO much more!! I can sit in a booth and not be squished up against the table. I can sit down on the floor to play with my daughter without having to use my hands to get down. AND I can sit there without pain and play with her. I can go up and down stairs without pain in my knees. I have more energy and I feel so good!!

This surgery was one of the BEST decisions I have made in my life! (other than marrying my AWESOME husband and having my 3 beautiful children).

And as for eating all of those foods that I used to??? Well, I don't eat fast food anymore. I tried MC D's once and felt SO sick I haven't touched it again. I no longer eat pasta or rice..it doesn't feel good. I also don't eat bread very often either. A footlong sub at Subway used to feed me in one sitting (with chips and a diet) but now a footlong feeds me for 4 days (with NO chips and soda) :) It is a big change! However..I can still eat chocolate :) There are some that are no longer able to eat certain foods after this surgery, sugar being one of them. For me, that is not the case and I am happy about that :) I need chocolate every once in a while. But now it is a piece or two..not a whole candy bar. And cake?? What is that?? Now it is one or two bites and I am done. I can't eat a whole piece anymore. But that is ok with me. A taste now satisfies :)

This surgery is NOT an easy way out, like I thought it was. It is A LOT of work!! But my children and my husband are so worth it!!! 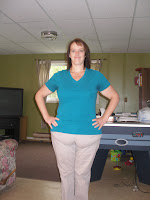 Gwen
I am a mother of three children. Two boys (13 and 10) one girl.(6)I have been married to my wonderful husband for 14 years.